magicbeans. nothing if not awkward.

bean is not actually from antarctica. his heart is covered in paisleys.

he makes tiny little pictures and sometimes writes about his life. 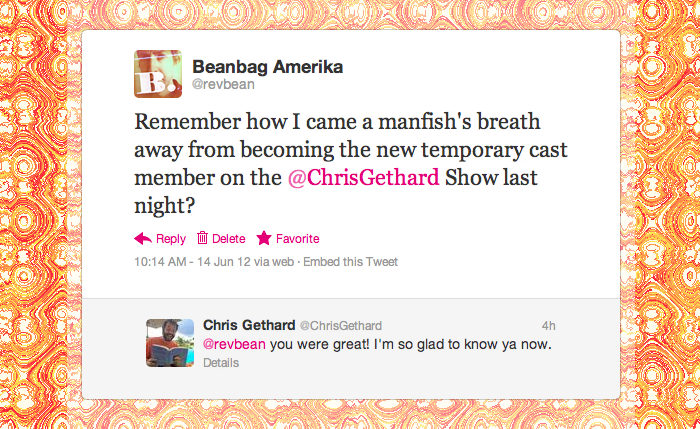 Back in late January or early February I discovered The Chris Gethard Show, a comedy variety/talk show that happens live every Wednesday night on Manhattan public access TV (and streams on the internet). I was vaguely aware of Chris as a comedy personality; he does improv at the UCB Theatre (where a previous incarnation of the live show happened), had just recently had a book published, and had starred on a sitcom that I had never seen. But I think it was his interview on Julie Klausner's How Was Your Week that got me to start watching the back catalogue of the show.

I started with the most recent episode, entitled "Loser Is the New Nerd," which was based on the premise that nerddom had been coopted by the mainstream as something that's actually cool, and "a loser is a nerd who doesn't have a choice." It was incredibly uplifting and empowering. Yes we're awkward, was the message, but we can build community from that awkwardness. I had worked my way through about a third of the archive by the time the next show aired.

I watched "Search for the Next Random" live on a glitchy feed in my living room. The term of the second "Random," Andrew, a temporary cast member without connections to the show, was coming to an end, and it was time to find a replacement. I wanted to make my way to the taping at the MNN studios on 59th Street in Manhattan and try for the position myself, but was unable to overcome the inertia of staying home in Brooklyn and the fear of new people and things. Regret crept in over the course of the hour, and when the show ended I sent out a tweet:

The next week, when the field had been narrowed down to two and the final choice was picked, I again watched from home. The week after that, I think on the afternoon that the show was to air, Ted Leo was announced as the music guest. I've seen Teddy quite a few times over the years, from in-stores and tiny little clubs to big summer venues, and that familiarity, even if I've never really interacted with him in person, was enough to get me out to the show.

And it was totally worth it, I had a great time. But still felt shy and awkward when the show was over and shuffled out into the cold and the subway home. I came back the next week though. And the next. And the next. By my fourth or fifth week I had had some interaction with the audience wranglers—Andrew, Keith, and Rob—and some of the other regular attendees, and tagged along to the bar afterward.

I avoided interacting with Chris, one—because I'm shy and awkward, but also two—because I wanted to stay random enough to be in consideration for the next round of choosing a new Random. That round came, somewhat unexpectedly last night. It had been announced as Melissa's last show, but no call had been made for a new crop of potentials, as had been done on the previous two occasions. (The first Random, Jean, was truly random; she called into the show during its second week on the air, having stumbled across it on public access. She asked what they were up to and was invited to come hang out.) That call was made on the fly, a few minutes into last night's show.

Although I had been thinking about it for four months I wasn't exactly prepared to make my case, and was also, truthfully, a bit drunk from winning shots at bar trivia just prior to showing up. Also in an accelerated manner, the field was winnowed to two in minutes (by Andrew and Melissa) rather than over the course of a week in online voting. I was surprised to find myself in that final two, and to be brought back out before the Human Fish for the final selection. The Human Fish (called the show's "breakout star") is a half man/half fish who has only recently emerged from the sea and is figuring out the world of man in the form of one dichotomy (A vs B) at a time. He was presented with the conundrum "Random Ellen vs Random Bean," and didn't go my way.